The accused are from Switzerland, Germany and Sri Lanka. Some are former members of the World Tamil Coordinating Committee (WTCC), which represented the LTTE in Switzerland until 2009, and include its founder, his deputy and the person in charge of finances.

Between 1999 and 2009, they allegedly created a complex fundraising structure which involved coaxing members of the Tamil diaspora to obtain loans from banks. To raise higher amounts, the WTCC was accused of creating fictitious companies in the name of borrowers that issued fake salary certificates.

The 13 on trial face charges of fraud, false documentation, money laundering and extortion. As the LTTE was never declared a terror organisation in Switzerland, they will not face charges of funding a terror group, unlike cases involving Islamic State or al-Qaeda.

“The Attorney General strongly suspects the LTTE fraction under investigation of having collected the money in question by means of threats and by creating a regime of fear to induce them to make the payments,” says a court documentexternal link.

The Swiss funds were transported in cash by couriers to Singapore and Dubai, eventually reaching the LTTE in Sri Lanka who allegedly used the money to purchase arms. This funding system collapsed in 2009 after the LTTE’s military defeat at the hands of the Sri Lankan armed forces.

“I don’t think [the 13 suspects] should face trial as the LTTE struggled for the freedom and self-determination of Tamils, which is not a crime. It takes two parties to make a war and Switzerland should investigate the war crimes of the Sri Lankan army as well,” Anna Annor, president of Swiss Council of Eelam Tamils, told swissinfo.ch on Thursday.
Long-drawn saga

The whole process was set in motion in 2009 when the Office of the Attorney General launched an investigation against “unknown persons” for extortion, coercion, money laundering and organised crime.

In 2011, a vast sting operation in several Swiss cantons resulted in the arrest of several suspects who were later released within a span of two months. A year later, a delegation from the Office of the Attorney General and the Federal Office of Police travelled to Sri Lanka to interview around 15 witnesses.

“Around 80% of Tamils living in Switzerland had made payments to support LTTE at the time to support the struggle against genocide. That does not make Tamils supporters of terrorism,” says Kuruparan Kurusamy, former president of the Swiss Council of Eelam Tamils.

The trial of the accused was originally scheduled for June 2016. However, proceedings were delayed when the lawyer of one of the accused demanded that a bank involved in the financial transactions also be cited by the judge as one of the defendants. According to Kurusamy, the bank in question was Credit Suisse and he claims it had accepted 135 loans under the name of one Sri Lankan national based in Germany.

However, the Federal Supreme Court dismissed the appeal, allowing the trial to go ahead. A verdict is expected around mid-March.

Around 50,000 people from Sri Lanka live in Switzerland, mostly ethnic Tamils, who fled the island’s 30-year civil war that ended in 2009. Many applied for Swiss citizenship and as of 2016 there were slightly more than 28,000 people with Sri Lankan citizenship residing in Switzerland. In 2016, the Swiss government announced it would apply more stringent criteria for granting Sri Lankan nationals refugee status. (swissinfo) 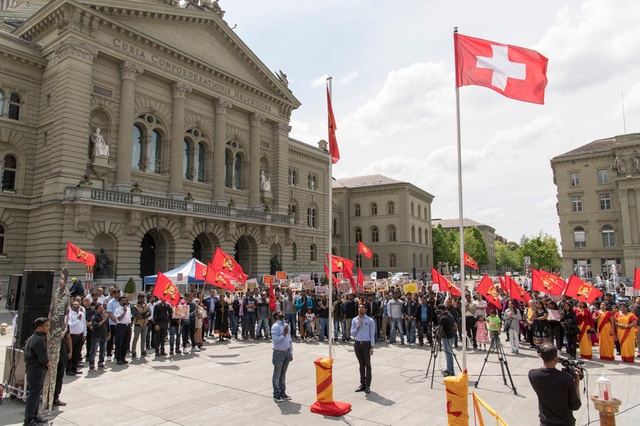 Lord Naseby’s statement in the British Parliament and the onus on...

Is International Human Rights Law Under Threat? Grotius Lecture at the...

Draft Bill to be gazetted soon Office for Reparations: